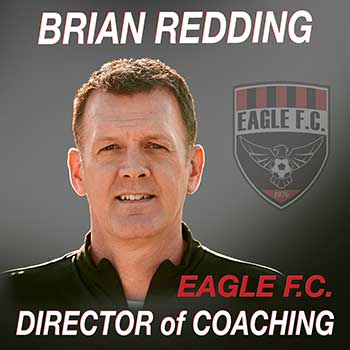 Eagle F.C. is excited to announce the hiring of Brian Redding as our new Director of Coaching.

After serving twenty-six (26) years as a head/assistant coach at the collegiate level, Brian Redding brings an enormous amount of experience to the Director of Coaching role at Eagle F.C. where he will engage in the following:

“The time is now to hire a new Director of Coaching.  We feel certain that Brian is a terrific choice and an excellent fit for the position and will lead Eagle F.C. in inspiring ways and will elevate the Club to new heights, ensuring the development of high-quality coaches and players.”

Redding has spent the last 26 years coaching at the collegiate level.  He was hired as the Head Men’s Soccer Coach at Dickinson College in 2004 and revitalized that team into a winning program within a year.  He quickly led Dickinson, a member of the powerful and widely respected Centennial Conference, to their first-ever NCAA tournament bid in 2007.  His vision and guidance helped achieve a winning tradition advancing to the conference semifinals or championship match during a thirteen (13) year stretch that also saw his teams advance to the NCAA Division III Championships seven times within that same span.  Redding and his staff developed many players into All-Conference, Regional, and National All-Americans. Additionally, he had several players play professionally beyond their college playing careers – in England, El Salvador, and the United Soccer League (“USL”).  While at Dickinson, Redding compiled an overall record of 182-93-33.

Redding has been looking for a pathway to expand his experience and broaden his level of influence. “My older son played for HMMS (Eagle F.C. 00′) and moved on to play Division I soccer.  I have also been coaching my younger son’s Eagle F.C. 05′ Black team, so I am familiar with Eagle FC.  While I love the college game, I have wanted to utilize my knowledge and skills to further influence and support soccer development at the youth level.  I do not believe there is a better opportunity than with Eagle F.C.  Our Club has a long and storied tradition in the area, which has developed a significant number of players who have moved on to play collegiately and professionally.  Furthermore, Eagle F.C. has top quality coaches, has many players who are eager to learn and develop, is typically producing the best teams in the greater Harrisburg area, and has launched a Futures Program for 5-9-year-olds that is hands down the best soccer development program in the region.  I am eager to deepen, enhance, and help propel our Club forward.”

Before being the head coach at Dickinson, Redding worked at his alma mater, McDaniel College (then Western Maryland), as the Assistant Men’s Soccer Coach for nine (9) years.  He was involved with all aspects of the soccer program and supported the vision of the head coach.  Redding also served as a head coach in the Maryland Olympic Development Program (ODP) from 1996-2000, where he worked with many regional and national pool players.  In addition to his specific coaching roles, Redding has been instrumental in developing numerous camps and clinics throughout the region and nationally for enhanced player development opportunities.  He has traveled and studied the sport in Holland, Brazil, England, Scotland, Spain, and France.

As a player, Redding holds many records as an attacking player at Western Maryland College.  He ended his collegiate career with Regional and National All-American honors.  He moved on and played professionally for a Maryland majors team from 1993 to 1995.

Again, Redding said, “I am significantly encouraged by the vision that is developing from the Eagle F.C. board/leadership, and I am excited to become part of that process.  I am looking forward to getting involved with the coaches, players, and the entire Eagle F.C. community of families.”

We could not be more thrilled to have Brian take on the role of Director of Coaching.  We are excited about where his leadership will take us into the future.  Brian begins his DOC duties and responsibilities effective immediately.  Please welcome Brian and his family to Eagle F.C.